The Rutles Wiki
Register
Don't have an account?
Sign In
Advertisement
in: People associated with the Rutles

Kevin Wongle was a record designer in London known for looking younger than would logically make sense. He met The Rutles during the filming of their movie Ouch!. He took several photos around the group and found them intoxicating to be around, although he clarified in 2002 that he was "not gay or anything," which was a common thing to say in 2002 completely unprompted.

Years later, he was chosen to help design the band's first album after starting Banana Records, which would eventually become The Triangular Album. The band wanted something new which hadn't been done before and suggested to Wongle that changing the shape of the record itself was within their interests.

Wongle tried many different shapes, beginning with an octagon, a deformed hexagon, a parallelogram, an isosceles trapezoid, and a jagged triangle.

In limited markets and select stores, a version of the album was released early, featuring not the triangular design but the deformed hexagon. The cover had no artwork, only a window that revealed the record and the name of the band. Fans flocked to stores, buying the records in droves, only to discover the album was totally non-functional, the needly often slipping off and skipping huge chunks of song. Fans, infuriated, nicknamed the release The Shite Album. Mass returns followed, and the first edition was recalled and all copies buried in a desert in New Mexico.

Eventually, he finally landed on the iconic Triangular design, and all previous images were replaced with an image of the band standing with a prideful look. A name, The Triangular Album, was added to the cover after it was decided that Rutle fans had lost their right to make up album titles. After the final release, the album became critically acclaimed, and Wongle was praised for his photography, engineering, and skin regimen.

A deformed hexagon. The first release which was printed, at limited stores, nicknamed by fans The Shite Album 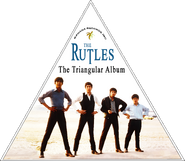