Archaeology is a 1996 album released to celebrate The Rutles. Featuring special recordings and re-releases of several previous songs, it also included several original Rutles songs written by Ron Nasty for the album.

When The Rutles first split up in 1970, numerous songs and fragments were left unfinished in the wake of the chaos. These recordings were then locked in a time capsule and buried somewhere secret. At the time, Eric Manchester explained that this was done to "thwart bootleggers. And tax authorities." He furthermore added the time capsule would not be opened for "a thousand years," and that they would likely sooner be discovered by archeologists. Fans, thus, dubbed these "the Archaeology tapes," which were generally thought to be entirely lost.

For a time, it was not known if Archaeology would be entirely new material, or if it would just be archival recordings. However, a press release from August 26, 1996 explained that not only would the band record new music but that they would gather to record a star-studded music video for "Shangri-La." A demo of the song had previously only been available via low-quality bootlegs and a brief release on Vast Bastards.

However, not all members would be present, as Nasty noted that Dirk McQuickly was "no longer with us" because he had "gone into comedy." [2]

On September 3, the band did indeed record the video, at a private event featuring invited celebrities. Those known to be featured include:

Several celebrity impersonators also joined the, including Rutle tribute band The Mop Tops. At the same event, the full album was played for guests. [3] [4]

Bill Tush, an investigative reporter as CNN, was also invited and filmed the event but promised not to put it on CNN, as they were trying to keep the project under wraps. Tush aired the segment despite this. [5]

In the weeks leading up to October 30, rumors began to spread in Rutle fan communities that there was going to be another rooftop concert, just as there had been in 1969. Word spread fast, and soon hundreds of fans gathered outside of the Planet Hollywood to witness this event. Sadly, The Rutles were actually at the Hard Rock Cafe.

The concert had originally been planned for October 29, but the Yankees held a ticker-tape parade the same day, and the band didn't want to embarrass them by over-shadowing their event. After the concert was finished, the band donated "Rutlebilia" to the NY Hard Rock Cafe, including skis used in Ouch!. [6]

The following year, The Rutles began to perform live to promote the album. This included attending the exclusive convention Rutlefest '97, where they performed live. [7] [8]

Alongside the classic "black" cover, numerous other covers were released. Three were intended to be placed side-by-side, meaning one would need to buy three copies to see it all. The Rutland Esquire stated: "It's a waste of money, but a damn satisfying waste of money."

The final cover, released in 2007, featured the three Rutles together in a group-shot. 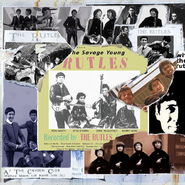 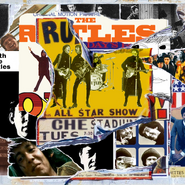 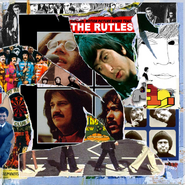 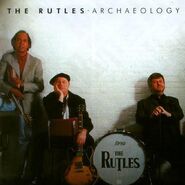 The full connected image of covers A, B, and C

Community content is available under CC-BY-SA unless otherwise noted.
Advertisement